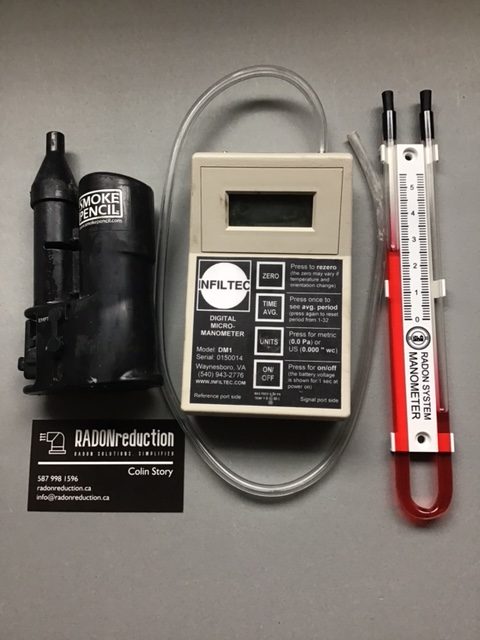 Diagnostics are the most useful tool for professional radon mitigators. Without proper diagnostic equipment and procedures, one is essentially just “hoping things will work out”. Not very professional!

Diagnostics allow a radon mitigation professional to ensure a successful result for their client the first time, with an effective and efficient system including correct fan sizing and slab (basement concrete floor) sealing. I will cover the most common tools used for radon mitigation diagnostics and each of their uses.

Diagnostics come in a variety of forms including pressure differential and pressure field testing using a micro-manometer, system/fan performance using a manometer on the system itself, airflow and air volume measurements using an anemometer, and leak detection using chemical smoke.

A properly installed Active Sub-slab Depressurization (ASD) radon mitigation will create a negative pressure (vacuum) under the basement floor reaching all parts of the basement. This is known as the “pressure field” or the area being affected by the ASD radon mitigation system. The system will draw the soil gas to a collection point under the slab (system suction location) and vent the gas outside the home to the atmosphere. To properly figure out pressure field, a sensitive pressure reading device called a micro-manometer is required. The process using a micrometer involves drilling small (3/8”) holes in locations furthest from the proposed location of the ASD radon mitigation system and measuring the “natural pressure” differential between the basement room (inside the living area of the house) and the area under the house/slab. The micro-manometer has two ports on it. One port is exposed to the room while the other port has a small tube attached to it which is fed through the hole drilled in the slab. This number should be positive, which indicates that there is a greater pressure below the slab than in the room. In other words, the room is a negative pressure compared to the area below the basement floor. Essentially the house is drawing the radon gas in because it is a lower pressure (vacuum) than the area below it that contains radon gas.

Once the “natural pressure” is measured in a variety of locations, a formula is used to calculate the target “negative pressure” that should be achieved for a successful mitigation of radon gas. The formula for calculating this includes accounting for region-specific environmental factors such as extremes of winter temperatures and house exposure to wind, the condition of the material under the slab, the length of pipe and number of 45 and 90 degree elbows to plumb from the system location (suction point) to the exit point where the gas is vented outside. Before one can begin to test for negative pressure, all large visible openings, gaps and cracks in the slab must be sealed. It is best practice to do this sealing prior to testing for natural pressure, but essential to have it done prior to testing for negative pressure. Once the major sealing is complete, a radon fan (or sometimes a shop vacuum) is used to apply suction at the system location, and the extent of the pressure field is measured again at the initial natural pressure test sites. This number should come back as a negative number, indicating that now the area below the slab is a negative pressure in relation to the room. I prefer using radon fans for pressure field testing as it has been my experience that the data gathered better reflects the actual end result negative pressure achievements than a vacuum does. If the target pressure is achieved, the system can now be built keeping in mind the amount of piping required and the number of elbows to be used. If not, a different strength of radon fan may be required, more material may need to be removed at the suction point, or possibly additional sealing is required, which brings us to the next diagnostic tool, chemical smoke.

Chemical smoke is a non-toxic “smoke” like what is used in fog machines. Chemical smoke provides a visual indication of what the air is doing and is commonly used by professional radon mitigators for leak detection. If suction is being applied under the slab, a chemical smoke gun can be used to put smoke around areas that have been sealed to verify that they are actually sealed correctly, and areas that the mitigator is unsure if they require sealing or not. If the smoke is applied and it is getting drawn in or down below the slab, that shows that additional sealing is required. Smoke guns can be very useful tools in diagnosing pressure field issues. Smoke checking should begin closest to the system location/suction point as this will have the greatest impact on system performance, and work outwards from there. Leaks should be sealed before checking further and further away from the suction point. Once leaks are identified and sealed, pressure field testing should be repeated.

A properly installed ASD radon mitigation system will have a manometer attached to it. These manometers can come in a few different forms with the most common be a “u-tube manometer”. A u-tube manometer is a clear tube shaped like an elongated “u” filled with a coloured oil. One end of the u-tube is left open to the room, while the other end is connected into the radon system pipe below the fan (suction side of system). When the fan is running it will draw the fluid up on one side of the U, and the fluid will be equally lower on the other side. This indicates that there is suction in the system. Each radon fan has certain suction parameters that it can work within. The u-tube manometer is an easy way for the homeowner to verify that their radon mitigation system is functioning properly as they just need to look at it to see that the fluid levels are uneven indicating that the fan is operational.

Once the radon mitigation system is fully installed and all the required sealing is completed, an addition performance check of the output at the exhaust point should be completed using an anemometer. An anemometer will show the volume and velocity of the air/radon mix that is being exhausted. These readings should be compared to the manufactures’ performance data of the fan. Too much output could indicate addition sealing requirements, while too little could indicate that the fan is being over-worked possibly due to improper sizing or poor sub-slab material condition. Proper adjustments to the system should be made based upon the data collected.

All of the above diagnostic tools combine to form a strong “tool kit” for successful radon remediation, and are essential for all radon mitigation professionals. Follow up testing should also be done to verify that the system is reducing radon as intended. I include a long-term radon tester (Alpha-track), and offer a digital radon monitor on loan, with every radon mitigation system that I install to verify the results. If you are interested in learning more, or want a free, no-obligation quote for a radon mitigation system in your house please fill out the contact form by clicking on “Request a FREE quote” in the menu.