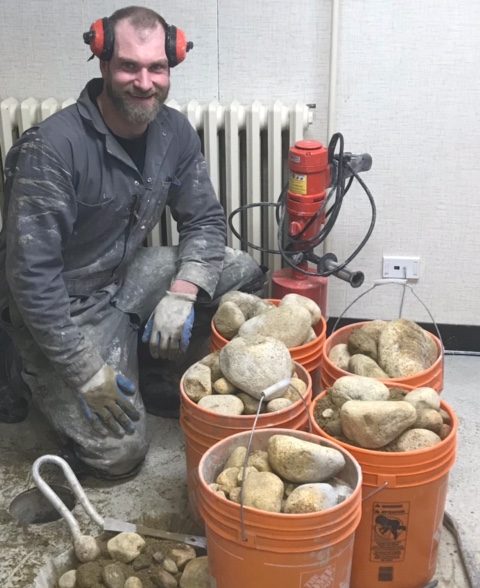 In the course of my radon mitigation career thus far I have had the opportunity to mitigate a wide variety of buildings.

The following are some of the weirdest, and most interesting jobs that I have been a part of:

Near the start of my radon mitigation career I worked for Alberta’s original radon mitigation company. With them, I was involved in mitigating RCMP stations in Elkford and Fernie, British Columbia. These jobs were very interesting and different due the restrictions and regulations that one would expect when they are in such a facility, not to mention the complexities of the physical buildings to be mitigated.

The job in Elkford was over a number of days and was my first exposure to mitigation on such a grand scale. The RCMP station had been temporarily decommissioned due to the high radon gas level. The building was quite old and was built with literal dirt under the basement floor (slab). This posed quite an issue as dirt is not very porous and very hard to pass air through. You can read more about how radon systems work in a prior blog creatively titled “How Does a Radon Mitigation System Work?”. Because of the sub-slab material, a trench measuring about 1 foot wide had to be cut through the slab from one end of the basement to the other (approx 40-50’) including branching off to connect all areas. Once the slab was cut, material (dirt) had to be removed and then replaced with gravel before the concrete could then be re-poured. This was a four-day job for four people and all of it took place under extremely hot temperatures with wildfire smoke thick in the air.

In Fernie, the RCMP station was still operational during the mitigation system installation. This meant that all movements within the facility were monitored. A guard would even observe while bathroom breaks were taken! Certainly not something I was or am used to.

Another very interesting job was also in British Columbia, in the small town of Nakusp. The picture included in this post was taken on this job. This radon mitigation job was in the town’s courthouse which was over 100 years old. The concrete walls were about 16” thick and full of large rocks. The material under the basement floor was dirt mixed with very large rocks. Communication (see my previous blog “What Are Diagnostics For Radon Mitigation?”) was hard to achieve and therefore a lot of the sub-slab material needed to be removed. Try pulling a 5.75” diameter rock through a 6” hole!

One of my most interesting residential mitigation jobs was also for this company, and took place just west of Okotoks Alberta. The home was large and beautiful, and located on a number of acres with an amazing view of the foothills and mountains. The most unique aspect of this job is that the initial radon readings were astronomical. The pre-mitigation readings were in excess of 8000 bq! Yes EIGHT THOUSAND becquerels! I was quite nervous working in those levels and took all precautions to reduce any harm from radon exposure including wearing a respirator, pressurizing the home, and monitoring radon exposure. This radon mitigation job was quite involved and took place over a couple of days. The part that really struck me was that we were all geared up in our PPE and taking all these precautions while the homeowner was just working away in the basement office with the glass doors closed like there was no issue.

The last weird radon mitigation in this post took place east of Lethbridge Alberta and was once again with the company that I used to install for. This was in a home that had been bought by the Alberta Government and leased back to the original owner. Likely for a future highway expansion or utility corridor. The tenant was what made this job so interesting. She was very abrupt and angry towards us right from the get-go for no apparent reason. She would not allow us to use the bathroom at all and instead required us to drive back at least 15 minutes to Lethbridge to find facilities. As you can imagine, for a crew of three people, plus a hired concrete coring contractor, over an entire day, this became quite inconvenient and time-consuming. The part that really struck me was that the tenant spent much of the day practicing hearing her goats around the yard and would then walk through her house with dirty boots but would not allow us use of the washroom!

All of these experiences have helped to round out my radon mitigation and customer service skills, plus they provide fond memories of jobs past. If you are interested in finding out more, or if you would like to book a free, no-obligation quote for radon mitigation in your home or building, please click the button in the menu titled “Request a FREE Quote”.

What Are Diagnostics For Radon Mitigation?
March 24, 2022

How Does A Radon Mitigation System Work?
March 2, 2022