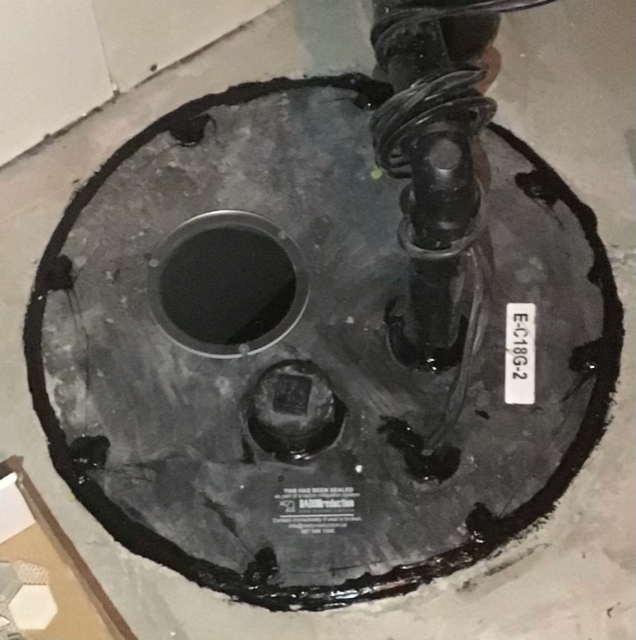 The idea behind a radon mitigation system is to create a negative pressure, or vacuum, underneath the concrete floor (slab) of your basement and vent the soil gas to the atmosphere before it can enter the breathing space of your home.

To do this, a hole is usually made through the slab to create the “suction point” of the radon mitigation system (unless your home was built after 2016 when a “radon rough-in” became part of the building code). This “rough-in” will include a stub of pipe that extends through the slab and is intended to be used as the system’s suction point.

A sump is a barrel with a lid that is located below the slab, with a pump in it, that is used to remove excess water below the slab. The sump barrel is fed with a loop of perforated pipe called “weeping tile” that usually runs around the interior perimeter of the basement to collect water and drain it to the barrel. Sumps can come in many different forms but the basic premise is the same.

The idea of using the sump as a location to apply the radon mitigation system’s suction to makes sense, as there is already a hole through the slab, and the weeping tile loop allows for the suction to easily travel around the entire basement. When the lid of the sump is well sealed, this can be a very effective approach. As with everything, there are pros and cons that should be considered before deciding to put your radon mitigation system on your sump.

Using the sump for your radon mitigation system’s suction point can be a good idea if the sump barrel is usually dry or the pump runs rarely. If you have hydronic in-slab heating lines that would potentially be damaged by coring through the floor, using the sump could be a safe way around this. If you know that the substrate (the material that the builder used under the slab) is not a porous material like gravel, but contains less-porous material such as soil/sand/clay, then using the sump may be a good option then as well. The other reason that it could make a lot of sense to use the sump is if it’s in a good location, where the point that you will exhaust the radon to the atmosphere is in close proximity to the sump, or if you would be putting the suction point hole through the slab right beside the sump. Convenience and ease of installation are important factors to consider when planning out a radon mitigation system, and these factors also effect project cost.

Leakage points such as a poorly sealed sump lid have a negative effect on the “ pressure field” that can be created by the radon mitigation system. The pressure field is the area the has a negative pressure, or slight vacuum, which draws in the radon gas and collects it before venting it outside. The larger the pressure field the more effective the radon mitigation system. Leakage points will cause loss of pressure field which impacts radon system performance. Secondly, there will be an energy penalty to the homeowner as air from the house which has be heated or cooled (at an expense) will be exhausted outside. In extreme situations, this can even cause a backdrafting situation.

In my years of installing radon mitigation systems in and around Calgary, I have had many successful systems that were located on sumps, although it is not my preference nor first recommendation in most cases. The seal of the sump lid is extremely important and should be checked thoroughly with chemical smoke to ensure no leaks whatsoever. All penetrations of the sump lid for pipes and cords must also be sealed well and smoke-checked. Any leakage points will negatively impact your radon mitigation system’s efficiency and effectiveness, as mentioned above. I have tried using some of the expensive “radon mitigation sump lids” but have found them to be tedious to install and cumbersome once in place and worst of all, the gaskets most often leak and need to be sealed anyway! I prefer to retrofit the existing cover to suit my needs, and it costs my customer way less.

If you have and sump, and are going to install a radon mitigation system, consider adding a Sump Cover Viewing Port (available in the online store) to your existing sump lid. This will allow you to easily monitor the sump barrel without breaking the seal. You can even remove and replace it (due to the gasket included with the kit) should you want to test the float function. I insist on installing one in every house that has a sump regardless of system location.
Whether you decide that locating your radon mitigation system on your sump is a good idea or not, the fact that you are reducing your exposure to this cancer-causing gas is what’s most important! I offer free, no-obligation site visits in order to provide accurate quotes for radon mitigation systems. All radon mitigation systems are custom designed and built onsite with great care to taken to ensure fantastic results. I guarantee to have your post-mitigation level below 100bq with results below 25bq most common. Please click on the “Request A FREE Quote” button to book your appointment today.

What Are Diagnostics For Radon Mitigation?
March 24, 2022